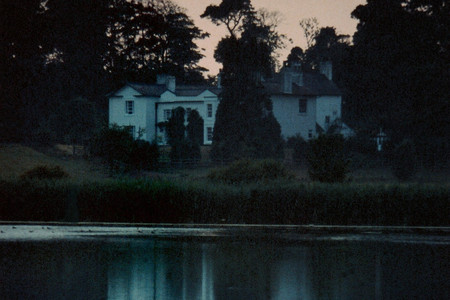 Constructing her coffee with scientific precision each morning, two vanilla creams, no sugar, was just the first part of her stringent routine, routine and repetition being some of the only things left in the world that kept Darby Morgan sane. Often she wondered why she even bothered since it seemed that all of her senses had been dulled to the point that she had trouble with smelling, tasting and even feeling, but for that last loss she was grateful as she could hardly go on living were she forced to feel the bottomless emotional maw left within her from recently losing her husband, Wayne, and 16 year-old daughter, Maya.

What emotions Darby did feel, she had lost the ability to properly categorize. Again and again they came sweeping over her in tidal waves of paradoxical sensation, guilt and rage, helplessness and sadness. She hypothesized that in the instant that she had beheld the oncoming collision, that she instinctively knew would be catastrophic, her life, in that well-established spiritual tale, flashed before her eyes in an electrically charged flicker of love, hate, fear, joy and all the others and had been captured within her like a rare photograph snapped at the moment of a distinct phenomenon otherwise utterly elusive to forecasting or preparation and it seemed now that as a result she had a hard time picking those emotions apart.

Late morning light from a sun that Darby could not recall her last unfiltered sight of engulfed the living room. On the couch where she had once plopped easily into her preferred spot with her family to watch a Friday evening movie, she sat lightly and with visible discomfort as she did every morning since the accident like a person sitting on a psychiatrists’ chaise lounge for the first time. She could hardly digest how familiar and foreign her things seemed to her at the very same time. Wayne’s cologne haunted her here, his favorite, and the same cologne that he had worn since college. It was light and woody with the slightest of floral touches and she could smell it almost every day as if they were still having coffee together on that couch as they used to do each morning.

Every day, for a mother who lost a young child, was groundhog’s day, but it was especially so, for a mother who lost her child and husband, in one day, in one accident, the same accident that left her practically unscathed. Perhaps, it was punishment. If it weren’t a punishment, it most certainly felt like one. Darby knew that for people like her, routine was the last link to normalcy without which sanity would surely fade, losing ground quickly to the impenetrably dark army of depression and despair. Routine was the only thing that she had left, awkward but comfortable like a budding adolescent boy still holding tightly to a ripped and stained baby blanket, but still she sometimes wondered if the dizzying monotony of it all wouldn’t soon demolish what was left of her faculties anyway.

Leaving this old house was out of the question, she needed the customary creak of the hallway door, the aromatic curry odor that was cemented into the curtains from years of preparing her husband’s favorite dish at least once a week, the electric blue stain in the white carpet where Maya suddenly learned first-hand why Darby always insisted that she paint her toe nails over newspaper. All of these intimate catalysts were necessary, they held all of the pieces of her broken self in place like the backboard of a puzzle without which the parts that composed the complete picture would crumble into meaningless shards. Besides, everything outside of these four walls, now petrified her. There were many days Darby stood at that door with her hand on the knob ready to try again, but paralyzing fear always won out. Inside was safe.

Since the accident, she had not been out at all and the hours dissolved into days and the days into years, sometimes quickly and at other times it seemed as if the clock hardly moved. Hours passed as she engaged in one of her countless monotonous customs, the ones that filled the time between the aroma of her husband’s cologne and Maya’s sweet whispers, studying the burnt orange floral patterns on the couch pillows, counting and re-counting the exactly 167 flower petals contained on each side of the set. Now, Darby wasn’t sure if the accident had occurred one week ago or one year ago, not that it much mattered anymore.

After a nap Darby woke to the muddled scent of fresh baked cookies of some sort. It was Mrs. Candela, she must have stopped by to leave them the way she always had, once a week, before the accident and even now, after the accident, she did not abandon the once cheerful duty, now, decayed into dreadful chore. Before leaving for vacation once, Darby shared a house key with Mrs. Candela that she never bothered to reclaim and when after the accident she refused to answer the door or come out of her home, Mrs. Candela had resorted to sneaking in while she slept and leaving only her cookies to signal her periodic presence. Darby enjoyed the smell of the treats more than the actual flavor as they never tasted like much anymore.

Everything in the present was of such little consequence, memories were paramount now, Darby thought as she swung open the door to her daughter’s room, which had gone unchanged. There was the faint and fleeting fragrance of her shampoo which put one in the mind of island vacation, coconuts and fresh papaya. Nothing less than a complete miracle, Maya was perfect and Darby had found herself thanking God on multiple occasions that she had not been delivered one of those drooping, slack-faced teens, like Bethany, the bird-faced neighbor who lived on the corner with her aloof husband and a son from her first marriage. A boy for whom they all shared a secret, community fear that he would one day soon be starring on the nightly news for gunning down a group of jovial teenagers at Mountain View High School. No, Maya was whimsical and fun, but predictable in an all American way, her personality always putting her mother in the mind of easy Saturday mornings, sharp, sunny and saturated with optimism.

Admiring the plush, pink comforter, Darby studied the Polaroids of friends and family that her daughter taped to the wall in the shape of a heart. Once again, she heard her daughter’s voice, laced with a soft, emotional lilt, the way Darby often heard it, when she came in Maya’s room to be with her. “Mom, I’m here.” The voice called.

Darby felt the tears puddling painfully at the corners of her eyes.

The IV monitor beeped rhythmically along with the silent tap of Mrs. Candela’s foot as she sat stiffly in the corner chair of the hospital room holding the plate of cookies that she brought every week. Wayne Darby sat, dutifully, at the head of his wife’s hospital bed as he had at least three nights a week for the last five years.

“Doctor, do you think that there’s still a chance that my mother will ever wake up? It’s been five years since our accident.” A young woman asked.

Dr. Diaz was sympathetic but firm, “Maya, we just don’t know. We are really lucky that all three of you even survived. Not much has changed, your mother’s brain activity is good, but I can’t promise you anything. She could wake up from her coma tomorrow, ten years from now or not at all. We just can’t be sure.”

“Do you really think that she can hear me?” Maya, now a college student junior wanted to know, seeking desperate confirmation for a question that she had asked repeatedly to anyone that would listen.

“Yes, I think she can hear you.” Dr. Diaz confirmed.

Maya turned and leaned into her mother who had been silent in a coma for the last five years. Taking her mother’s emaciated hand into her own, she whispered, “Mom, I’m here.”